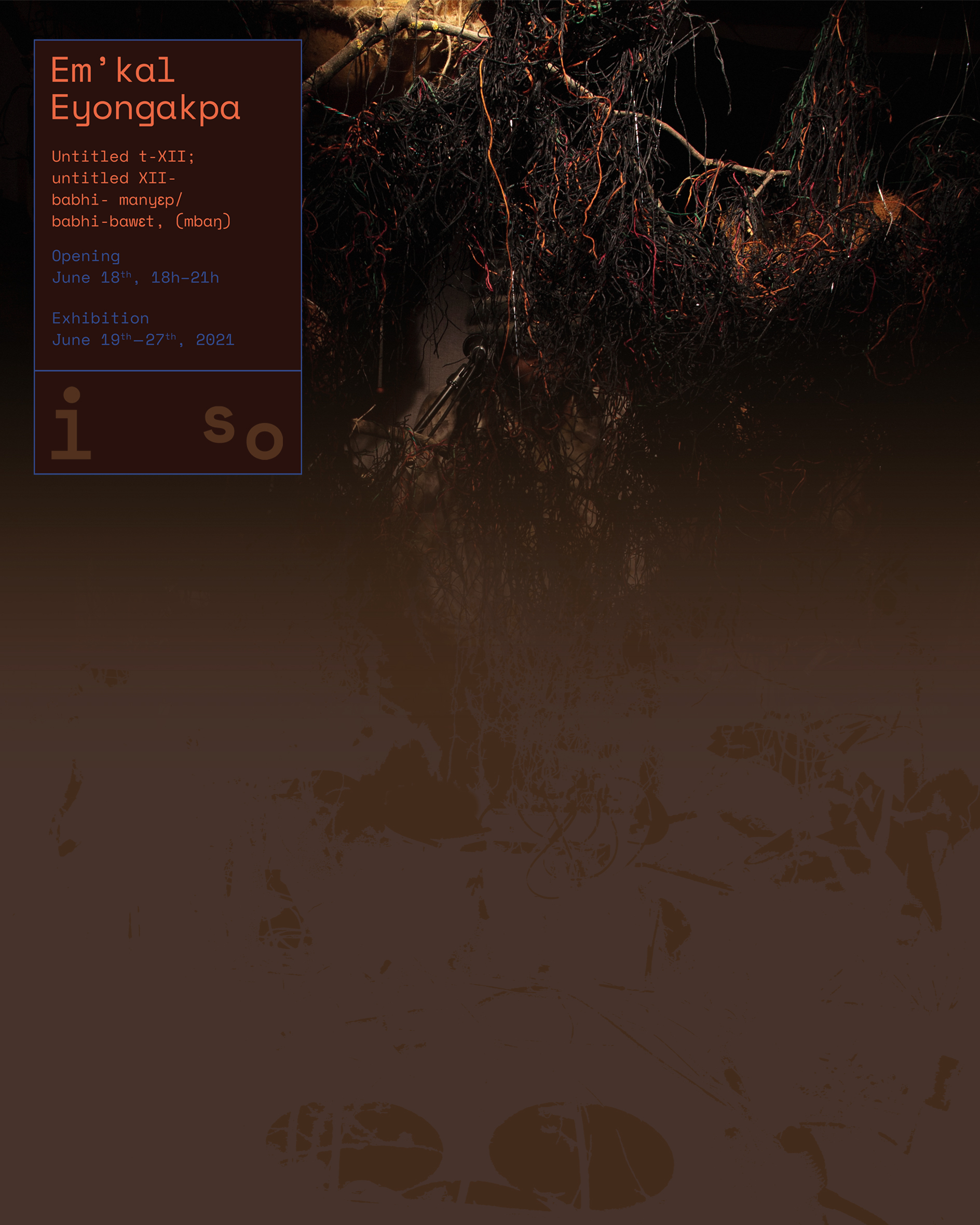 With high spirits, iso amsterdam opens their doors for the Amsterdam Art Week with an exhibition by Em’kal Eyongakpa!

Eyongakpa’s work draws upon indigenous knowledge systems, ethno-botany, applied mycology, and technology. During Amsterdam Art week, iso amsterdam will present his work “untitled xii-t.untitled xii – babhi-manyɛp/ babhi-bawɛt, (mbaŋ)” – an attempt, through a cluster of custom wooden platforms, to transcribe pure audio signals, recorded along selected routes around the neighbourhood of iso amsterdam. It is a continuation of the artists’s research on portals, crossings, ancient community preservation practices, and water, in relation to movements from the Gulf of Guinea and beyond. A strong focus is directed towards utopia/dystopia on lands and their cultures, especially ones that are historically linked to water. Building upon this idea of shared space and land, this sound installation is specially conceived by Eyongakpa to intertwine/ interact with the communal space of iso amsterdam.

To visit the exhibition by appointment, please send an email to info@isoamsterdam.nl

or register via this link

About the artist and the curator

Em’kal Eyongakpa was born in 1981, Eshobi, Manyu (Cameroon). He is known for his involvement in self-organised community research spaces, such as KHaL! SHRINE (Yaounde, 2007-2013) and Bɔ Bɛtɔk/ ɛfúkúyú, (Amsterdam, 2017-present). Eyongakpa holds degrees in Plant biology and Ecology from the University of Yaounde 1 and was a resident of the Rijksakademie in 2013-2014. The artist’s work has been shared/experienced at several gatherings and venues around the world, including van Abbe Museum (2020), Center for Contemporary Art, Lagos (2020), Showroom, London (2019), TBA21 Contemporary, Vienna (2017), Jakarta Biennale (2017), 13th Sharjah Biennial (2017), Montreal Biennale (2016), 32nd Biennal of São Paulo (2016), Bamako Encounters (2011 and 2015) and 10th Dak’Art biennial (2012). Additionally, EVA international Biennale and IMMA (Irish Museum of Modern Arta) recently announced a commissioning partnership with Eyongakpa for installations between Dublin and Limerick during the 2020-2021 encounters.

The exhibition is curated by Florence Parot. Together with Dajo Bodisco, she is the founder of iso amsterdam, and additionally works as the co-director of the Dirty Art Department, Master of art and design at Sandberg Instituut with Jerszy Seymour. Before the emergence of iso amsterdam, Parot functioned as the associate curator at the Musee National d’Art Moderne, Centre Pompidou (Paris) from 2003 to 2017, where she oversaw the video collection and initiated numerous of exhibitions, screenings, lectures and performances.

This presentation has been made in collaboration with Noah Cohen. Born in Paris in 1995, Noah Cohen is a Sculptor and videographer. Along his travels, Noah built his artistic universe around the raw beauty of industrial landscapes and materiality; transforming discarded wrecks into poetical playgrounds inhabited by fascinating narratives and characters.