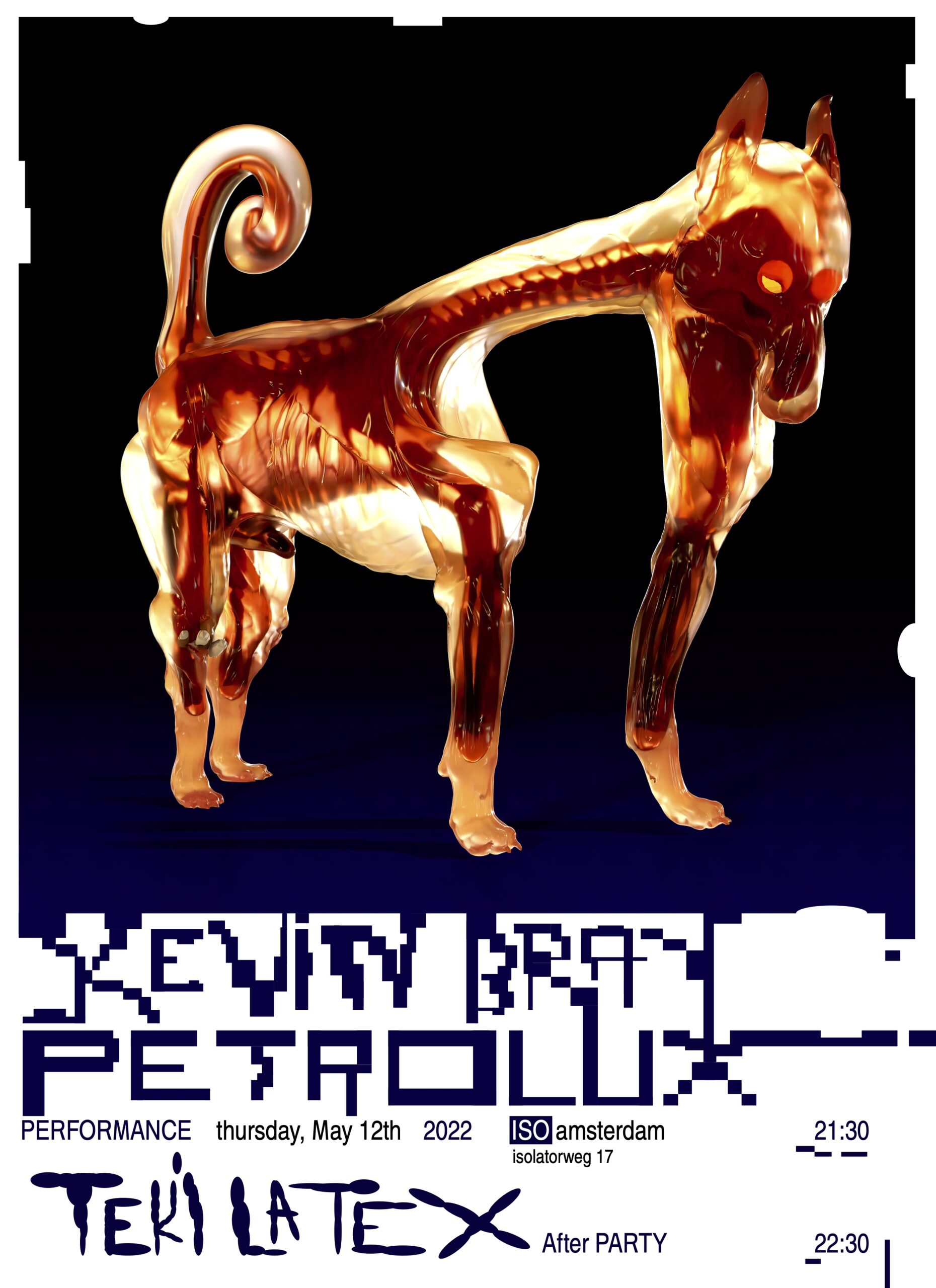 Petrolux, a performance by Kévin Bray: 21:30

After 22:00
€12 via online
€15 at the doors
Half goes to Uzvar KABK Collective, a student initiative to support Ukraine

For Amsterdam Art Week, ISO Amsterdam is thrilled to invite Kévin Bray to introduce his most recent project ‘Petrolux’. Developed through out a residency period in AlUla, Saudi Arabia, Bray’s latest visual gesture is a performance bridging the past and the present through  the lens of science and fiction. Petrolux is an active collaboration with the artists of ancient petroglyphs carved on the boulders of AlUla thousands of years ago. This time-bending dialogue between them, aims to highlight how scientific tools and theories which are specifically used to get closer to possible historical truths can also help us to create more believable fictions. The fictions of today – as surreal as they can be – are often built with a certain level of scientific realism for the imaginary world to be comprehensibly rooted.

For example, a fictional character will have a logical or recognisable bone structure and muscular system to help us understand the reality of its existence. Starting from this premise, through a research embedded in the development of the relationship between humans and the natural world, the artist is borrowing engravings of dogs and cattle appearing on the desert stones in order to reinterpret them with the help of contemporary technologies and scientific knowledge. By doing so, he is crafting present-time resonances that echo with the depths of our past (fictions). Similarly to the ways which scientists try to breathe life into the ‘rigorous systems’ of our history. This project has been developed within the artist-in-residence programme of the Sigg Art Fondation in AlUla (Saudi Arabia), on the invitation of Sacha Guedj Cohen in January-February 2022.

Kévin Bray (b.1989 France) is a visual generalist and artist currently based in Amsterdam.

He was an artist-in-residence at the Rijksakademie in Amsterdam (2018-2019) and holds two Graphic Design Masters degrees, one from Sandberg Institute (2011-2013) and from ESAAB Nevers (France) (2009/2011). His work has been exhibited internationally in various locations such as Palais de Tokyo, Paris (FR),  FOAM photography museum, Amsterdam (NL), Dordrecht museum (NL), Future Gallery in Berlin (DE)… Traversing from cinema, graphic design, illustration, painting and sculpture to music and writing, within his practice Kévin Bray tries to understand how the form and language of a particular medium is visualised and manipulated, in order to impose those codes onto another medium. With this methodology, his interest lies in playing with the porosity created through the confrontation of these tools and the mannerisms they are dealt with, aiming to open and diversify a language through exploring the edges of its possibilities. With his images Bray blends and conceptualises the parameters of these expressions to assemble symbolic narratives, commenting on our diverse existences and the appearances they embody.

Since the very beginnings of ISO, Kévin has been a ‘pillar’ of our industrial creative warehouse. He was one of the first studio renters, the first artist exhibited in 2017 and he co-created our visual identity, realising our DNA film that can be viewed on the website of ISO.

Kévin’s lecture and performance will be followed by a gathering sonically hosted by Teki Latex and jujulove. DJ, King of Blends, Rinse FM & Rinse France resident and host for Boiler Room France, co-founder of cult labels Sound Pellegrino & Institubes, former TTC member, creator of defunct DJ video broadcast ‘Overdrive Infinity’, Teki Latex does it all. jujulove is a world builder, a witch, a rave elf, an oracle… Inspired by feminist science fiction, manga, pop culture and fantasy, she opens parallel worlds at 170bpm. jujulove aka Juliette Lizotte is a video maker, designer and DJ based between Amsterdam and Brussels. SasaHara (b. 1993, Paris) will open their studio and dive in their drag transformation process and storytelling works. They will then roam the warehouse in their Angry Sylvan character (outfit by Rozy). Mariana Jurado Rico (b. 1991, Bogotá) will facilitate a point of merger between people, to launch her billboard Such is Life in the Tropics on the northern facade of iso, made in collaboration with Trabajajajar. During this second part of the evening, Teki Latex & jujulove’s music set will be accompanied by video works made by the graphic design students of the Royal Academy of Art (The Hague), where Kévin Bray has been a teacher for the past 8 years.